Deerfield boasts numerous draws for businesses looking to relocate, Diana Schindler says, from its reasonable property-tax rate to its proximity to Interstate 91, Route 116, and Routes 5 and 10.

But there’s also been some pushback against some of those businesses, which reared its head when residents recently spoke out against a proposed Dollar General store in town. The Planning Board listened and turned down the project, said Schindler, Deerfield’s interim town administrator.

“There’s been a feeling in the community that they want that at arm’s length — that big-box retail development, drive-thrus, things they don’t feel are part of the culture of old Deerfield. It’s meaningful to them,” Schindler told BusinessWest.

“On the flip side, it creates more of a burden on the residential tax base,” she went on, noting that more than 80% of the town’s tax base is residential. “There’s a cost to the citizens in their tax rate and the sustainability of that tax rate. Deerfield has always readily paid for the level of service its citizenry wants and expects but at the expense of not doing some major projects.”

For instance, the town is looking at a $1 million cost to replace a tank at the South Deerfield Wastewater Treatment Plant, which is only the tip of the iceberg when it comes to needed work at the facility over the next decade or two. Then there are plans to expand the Tilton Library and develop a shared senior center with surrounding communities.

“Seniors are asking for that. But all this adds up to millions of dollars, and you have the pressure of limiting development — or, rather, wanting development that will fit into the culture, which does limit it to some capacity,” Schindler said.

“Less than 20% of the tax base is commercial/industrial, which is not a lot considering the viability of the property we have along 5/10 and a couple of other areas. It’s going to become a question for the citizenry — is it sustainable?”

She’s one of many in Deerfield who believes economic development — in whatever form residents may want — is critical to the future of a town known for its tourist draws, including Yankee Candle’s flagship store, Mount Sugarloaf, Historic Deerfield, and Magic Wings, but needs to diversify and broaden its commercial portfolio.

“At first, they wanted to hide it, put it on the outskirts of town, but now they want it close to downtown. And that’s where it should be — take it out of the shadows, take it away from the edge of town where people can just pop in and leave. Bring them in and use it for economic development.”

“The ideal would be to get everybody together and integrate it all. We’re spread out geographically, and there’s a dichotomy between Old Deerfield and South Deerfield. We’re working toward making sure the town is the town, and everybody recognizes that if the town does well and comes together, then all of the components, all of our events, could do better.”

But she’s more concerned with Deerfield’s residents, agencies, and organizations working together to forge a common vision for community development.

“If we could come together,” she said, “especially as we come to our 350th-anniversary celebration, we could build energy off of each other.”

That celebration rolls around in 2023, which should be enough time, Schindler said, to see some real development progress in town, particularly in the Elm Street corridor, the main commercial area in South Deerfield.

Town leaders know that to attract new businesses — in hospitality and other sectors as well — they need to make the downtown area more inviting and pedestrian-friendly, and they’re eyeing a host of potential improvements in the Elm Street center, which may include work on sidewalks, lights, and storefronts.

For a year before taking on her current role last month — one she is interested in pursuing on a permanent basis — Schindler was a special projects consultant in town, and one of the big projects she embraced right away was Complete Streets, mostly geared toward the South Deerfield center. 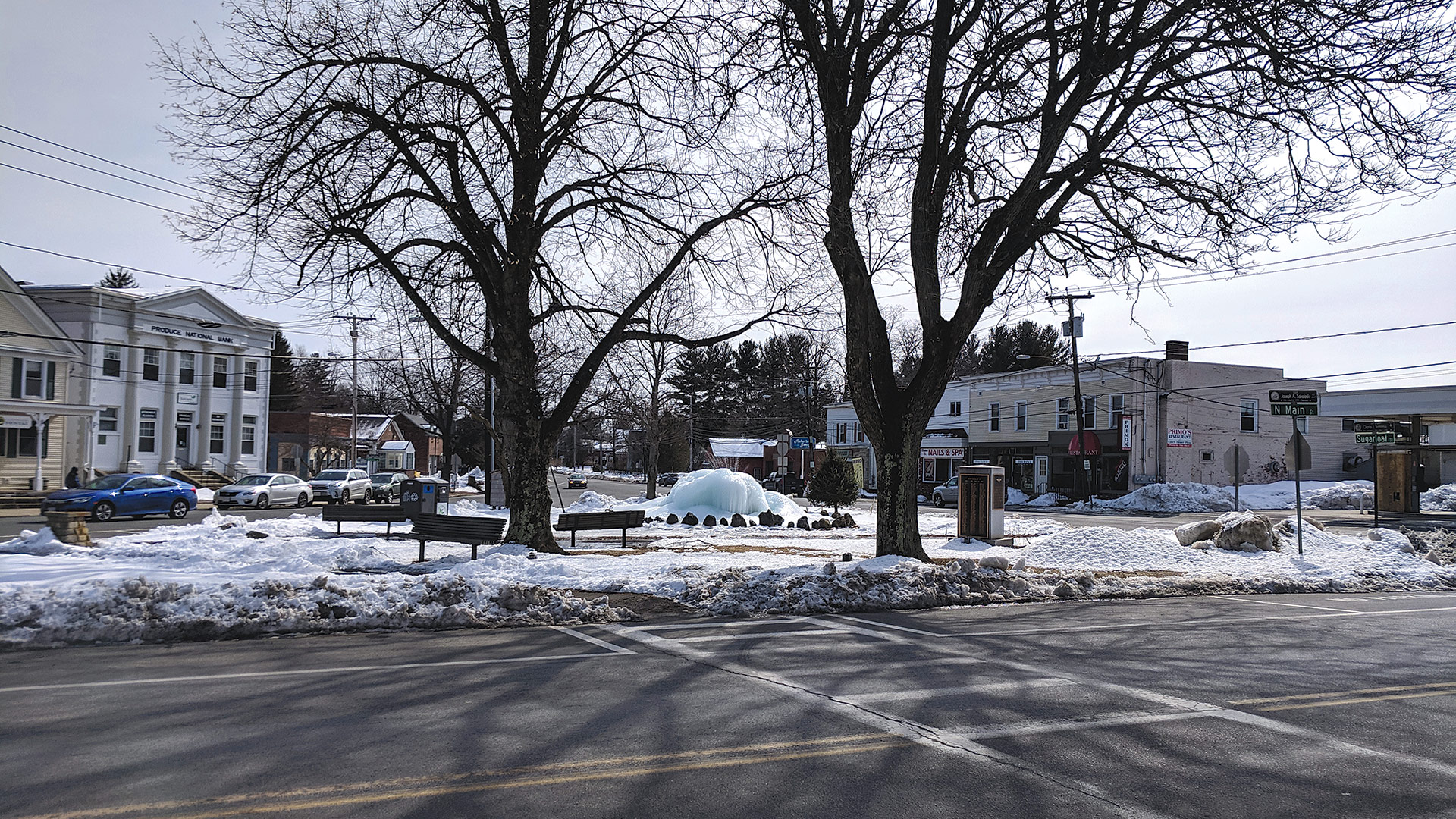 “We’re in the process of putting that plan together. We want to create more walkability, more accessibility, and that includes for folks in wheelchairs, people with children, people of all abilities,” she said.

“We’re also looking at ways to make South Deerfield’s center more aesthetically pleasing — light it, put in streetscapes, put in wayfinding, finish the municipal parking lot we have down there; all that is being discussed as part of the plan. We want it to stay a viable downtown.”

The area is not particularly expansive, she pointed out, spanning just a few blocks, but in some ways, that presents a more enticing opportunity, by ensuring that development and improvement efforts are tightly focused.

There’s some land-use complexity as well, as the Massachusetts Department of Transportation owns a small part of the corridor, and the state owns Conway Street, home to Town Hall.

“But that’s an opportunity,” she said, “because the state is also excited about Complete Streets, and we could see a wonderful economic center down here, which I’m sure the state would support in a variety of different ways.”

The downtown has seen some business change recently, with longtime restaurant Jerry’s Place closing last year, and a café called Leo’s Table setting up shop in the location, with proprietor Jennifer Howard specializing in made-from-scratch breakfast and lunch fare.

The building itself — which is also home to Ciesluk’s Market, the Tavern, and a Subway sandwich location, (which is closing) as well as 19 apartments on the second floor, has new owners, Jason Kicza and Justin Killeen, who plan to touch up the property this spring.

“I would consider that the anchor building on that side,” Schindler said, “and it’s doing great.”

Cumberland Farms’ move from South Deerfield’s center to the main road — specifically, the corner of Elm Street and Routes 5 and 10 — may not have been as great for the downtown’s prospects.

Deerfield at a Glance

“They have a bigger business down on the corner, but it’s not necessarily a draw into the center; now people can just pop into Cumby’s for gas and keep going,” she said. “So we are looking at ways to basically create more stability in the center of South Deerfield by doing a variety of things. Obviously, part of that is keeping businesses and attracting more businesses.”

These days, the corridor can be oddly empty at certain times of the day, she noted, but well-trafficked during morning and evening rush hours. The goal, she told BusinessWest, is to turn it into a pedestrian-friendly center at all hours, rather than a thruway.

The Complete Streets plan will be a big part of that. By the time the 350th rolls around, she’d like to see significant physical and infrastructure improvements to make the downtown more of a destination. “The sidewalks will look different, maybe more green space, and hopefully we’ll see more people down there.”

Like many area communities, Deerfield has embraced the burgeoning cannabis industry in Massachusetts, recently approving two site plans, one for a cultivation facility at Pioneer Gardens on Mill Village Road, and the other for a dispensary run by Harvest Inc. on State Road.

“The culture has changed,” Schindler said, noting that, when communities were first exploring the economic possibilities of marijuana businesses, many Deerfield residents — most of them older — were staunchly opposed. But that opposition has died down to a large degree in many towns, to the point where communities might begin to locate such businesses in more central areas.

“At first, they wanted to hide it, put it on the outskirts of town, but now they want it close to downtown. And that’s where it should be — take it out of the shadows, take it away from the edge of town where people can just pop in and leave. Bring them in and use it for economic development.”

Meanwhile, Schindler and other Deerfield leaders will continue to think outside the box — even if big boxes aren’t in the cards — by examining where pockets of land already devoted to commercial and industrial businesses might have some infill potential, and continue to take pressure off the residential tax base.

“The thing I think is so tremendous about Deerfield is the huge opportunity it offers,” she said. “It’s wide open, and it’s got resources — financial resources, natural resources, culture, art, access to main roads. I get excited about it.”

Joseph Bednar can be reached at bednar@businesswest.com  This article originally published in Business West magazine. April 2019